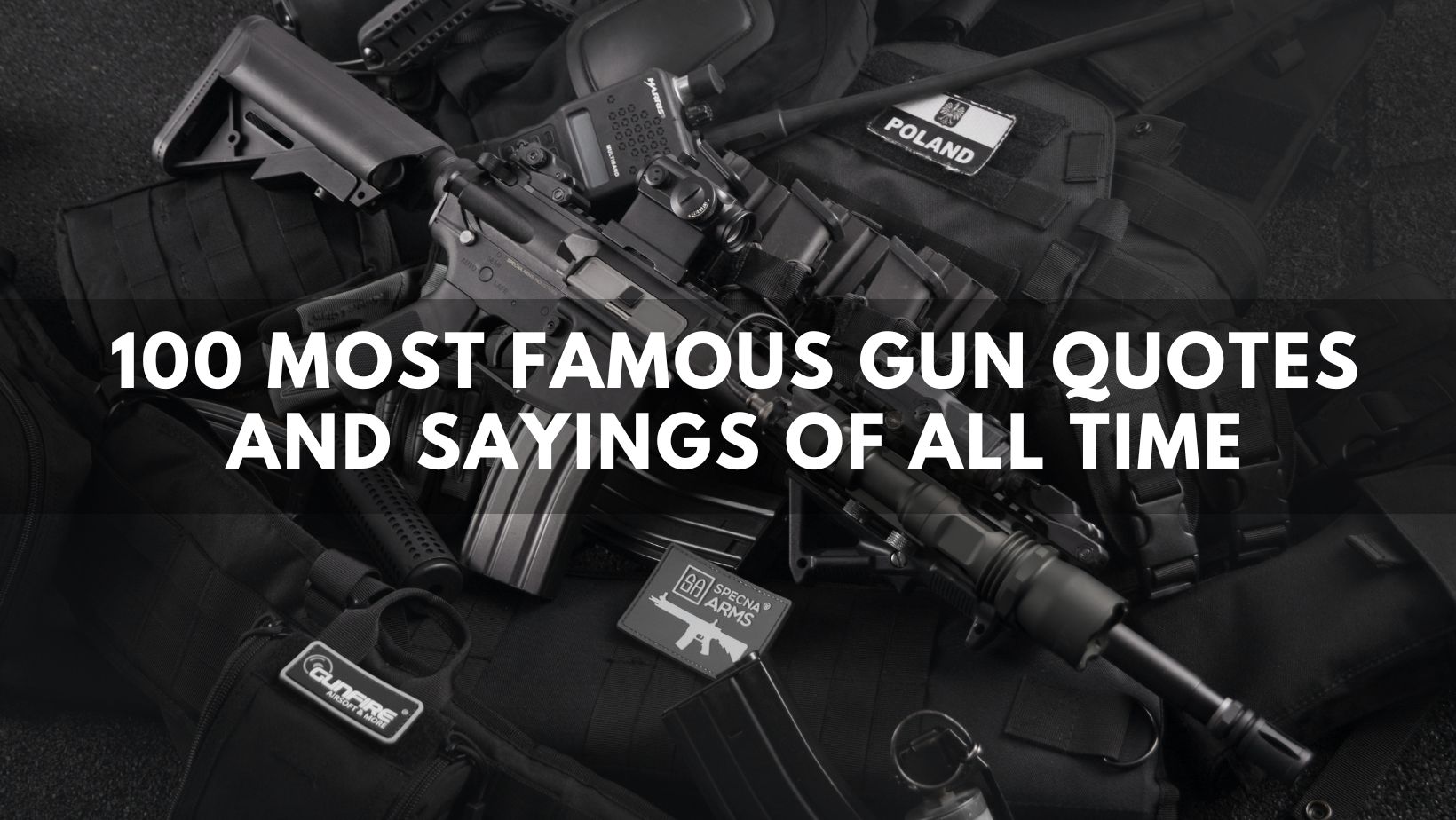 There’s no one right answer when it comes to guns. Everyone has their own personal beliefs and reasons behind owning one, and that’s okay. Besides, guns have always been a part of American culture, and there are many insightful quotes about guns that can be used in speeches, articles, or other writing.

From firearms training to self-defense, these quotes will help you to see guns in a new light. We hope that through reading these quotes, you’ll be able to have a more informed perspective on the gun debate and make an educated decision about whether or not to own one for yourself. So sit back, relax, and enjoy some positive gun quotes!

I am a gun owner and a hunter and a gun rights supporter.

It’s one thing to shoot yourself in the foot. Just don’t reload the gun.

One man with a gun can control 100 without one.

I believe the gun has no power at all.

When in doubt, have a man come through the door with a gun in his hand.

I bought a gun and chose drugs instead.

We need strong gun laws. How can people even ask a question about it Gun control is so important.

Remember the first rule of gunfighting… ‘have a gun.’

A gun is no more dangerous than a cricket bat in the hands of a madman.

A man with a briefcase, can steal millions more than any man with a gun.

Make no mistake about it. Gun control is not about crook control. It’s about America control.

I have a very strict gun control policy if there’s a gun around, I want to be in control of it.

Everyone smiles with that invisible gun to their head.

Bullets cannot be recalled. They cannot be uninvented. But they can be taken out of the gun.

A car is a killing machine. It’s like waving a loaded gun. People don’t realise how dangerous they are.

I could get into bed with James Bond, then take my false leg off and it would really be a gun.

Ideas pull the trigger, but instinct loads the gun.

I know what it feels like to be a gun lover.

Political power grows out of the barrel of a gun.

If guns are outlawed, only outlaws will have guns.

Your genetics load the gun. Your lifestyle pulls the trigger.

Sometimes if you want to get rid of the gun, you have to pick the gun up.

It’s not smart to get caught without a gun.

An ugly woman with an ugly gun is a terrible thing.

It’s fine to have armed guards, but don’t then tell everyone else they can’t own a gun.

As they croak, I see myself in the pistol smoke.

Having a gun in your hand is very empowering.

I love New York City; I’ve got a gun

A gun in the hands of a secret service agent protecting our president isn’t a bad word.

All you need for happiness is a good gun, a good horse, and a good wife.

It ought to have gangsters, and aeroplanes and a lot of automatic pistols.

A woman should have the right to carry a gun.

If you look down a barrel of a gun… you don’t forget it.

You can’t go to a negotiating table pointing a gun, but you’ve got to keep it over your shoulder.

Working in a gun store is hard on your feet and your back.

I’m definitely going to miss hearing the sound of that gun.

The Pistols were like my work of art. They were my canvas.

I like that run and gun type of stuff. That fits right into how I like to play.

If you really want to kill yourself, get a gun a blow your head up.

Banning guns is like banning forks in an attempt to stop making people fat.

I had a gun and I had to run and shoot, which is not easy.

Son! I’ve got a short temper and a long rifle.

Guns are like thermometers, only instead of measuring body temperatures they measure our fear.

In the past, when I lacked designer duds, I simply relied on my hot glue gun.

I’m not gonna shoot anyone with the pellet gun… Not unless I have to!

I’m happy riding horses and getting out shooting my gun, things like that.

When shoes and clothes and food, when hope is gone we’ll all have the rifle.

By the end, everybody had a label – pig, liberal, radical, revolutionary… If you had everything but a gun, you were a radical but not a revolutionary.

If time were the wicked sheriff in a horse opera, I’d pay for riding lessons and take his gun away.

When shooting in the dark, it is a good idea to use a machine gun.

If someone has a gun and is trying to kill you, it would be reasonable to shoot back with your own gun.

I mean I’m a gun-owning pacifist, so there you go.

Don’t you read the statistics Guns are unisex these days

That rifle on the wall of the labourer’s cottage or working class flat is the symbol of democracy. It is our job to see that it stays there.

An armed society is a polite society.

A man’s rights rest in three boxes the ballot box, the jury box, and the cartridge box.

When you come for my guns, bring yours.

Cogito, ergo sum armatus I think, therefore I am armed.

If guns cause crime, then matches cause arson.

I’ve got my twin Glock 40s cocked back, me and my homies. So, drop that.

A shoot-out is better than a massacre!

Normally, I always had a machine gun in my car and a bulletproof vest.

My alarm tells me you’re in my house. My gun tells me not for long.

Happiness is a warm gun.

Guns are like boobs. Even the small ones are fun to play with.

The only real power comes out of a long rifle.

One who brandishes a pistol must be prepared to shoot.

Bloody war! What do you think all these bullets and all these guns’re made for

A gun in the hand is better than a cop on the phone.

A gun is like breath to a drowning man–it has to be drawn in haste.

Firearms are second only to the Constitution in importance; they are the peoples’ liberty’s teeth.

I learned how to fire a sniper rifle, which I’m sure will be useful at some point.

I put the pistol by my head, and say a prayer. I see visions of me dead, Lord are you there

That was the trouble with explaining with words. If you explained with gunpowder, people listened.

If in the first act you have hung a pistol on the wall, then in the following one it should be fired. Otherwise don’t put it there.

Lose the chrome-plated sissy pistol and get yourself a Glock.

No longer living in fear, my pistol close in hand, Convinced this is my year..

The best we can hope for concerning the people at large is that they be properly armed.

Two of my favorite things are my steering wheel and my Remington rifle.

Guns only have two enemies; rust and politicians.

Quotes about guns are a popular topic for blogs, as the topic of firearms is one that is fraught with emotion and debate. In this blog, we provided you with some valuable quotes about guns that will help you explore the topic from a variety of perspectives.

We hope you have loved these amazing quotes about guns. If you loved these quotes, then do not forget to share these on Facebook and Instagram. Besides, you can check out our some amazing Quotes for Police.

What are your thoughts on quotes about guns? Let us know in the comments below! 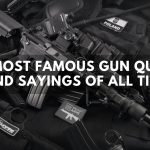