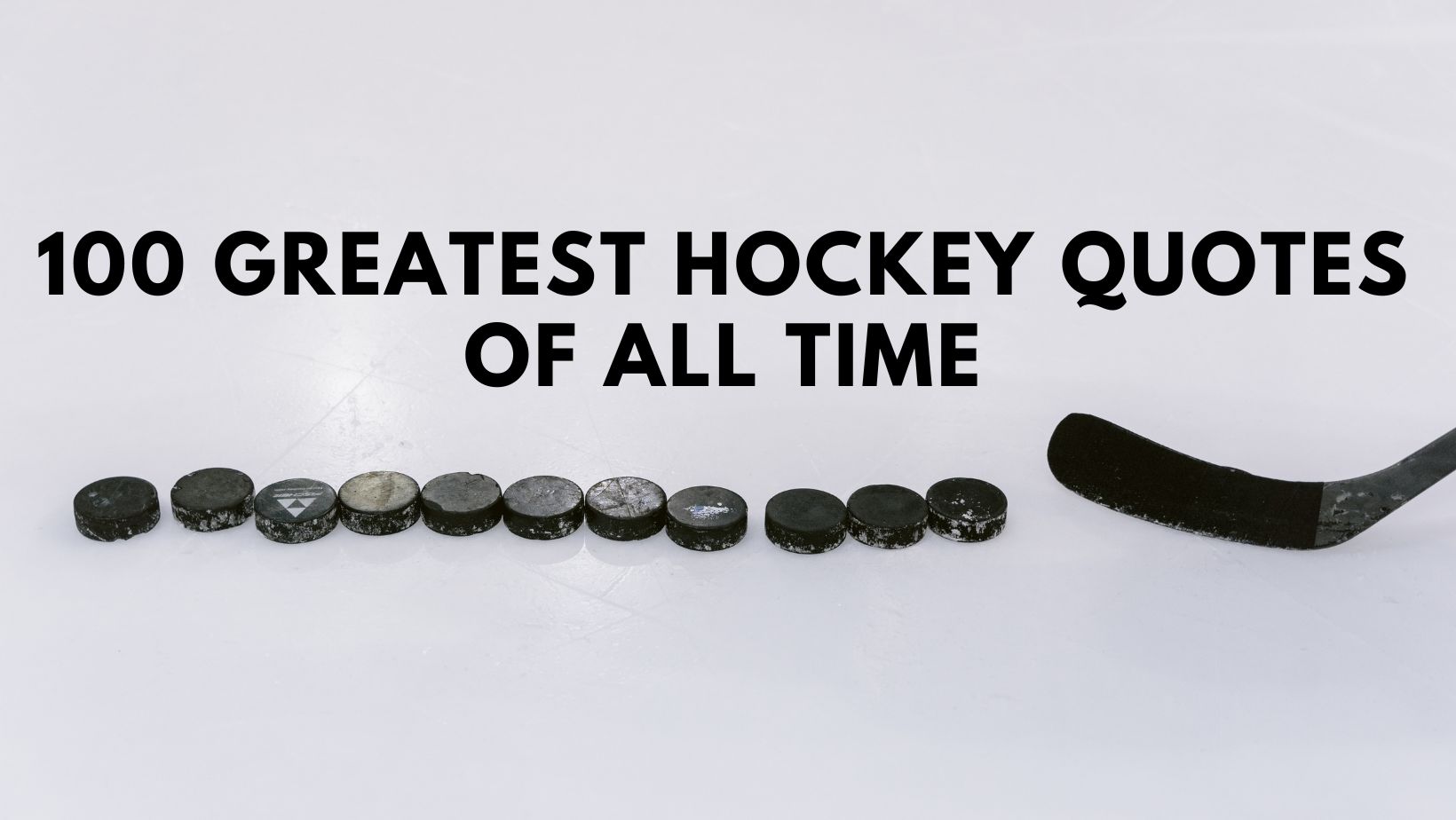 There are some sports that require a lot of physical and mental strength and hockey is one of them. Sometimes to practice hockey or to do better in the field, a little bit of inspiration and motivation is all we need.

These motivations come from many sources, but one of them is quotes and saying. That is why we have put together the best 100 inspirational hockey quotes that can motivate you in many ways to play better hockey.

Overall, you can get some great hockey quotes here that can make you laugh, give you goosebumps and most importantly motivate you to practice hockey more often and do well in this sport.

If you are a hockey player and you ever want to give up, then you should go through these hockey sayings and quotes at least once. Maybe you will change your mind.

Be so good that they can’t ignore you

Hockey is where we live. Life is just a place we spend between games

There may be players better than you, but there is no excuse for anyone working harder than you!

Don’t go through life without goals

It takes balls to play hockey

My goal is to stop yours

It’s not how BIG you are, it’s how big you PLAY!

Winning means you are willing to go longer, work harder and give me than anyone else

Let your mistakes make you better, not bitter…

When hell freezes over, I’ll play hockey there too.

My goal is to deny yours.

Hockey is figure skating in a war zone.

Hockey players have fire in their hearts and ice in their veins.

I went to a fight the other night, and a hockey game broke out.

All hockey players are bilingual. They know English and profanity.

Hockey is murder on ice.

We take the shortest route to the puck and arrive in ill humor.

Some people skate to the puck. I skate to where the puck is going to be.

Half the game is mental; the other half is being mental.

Ice hockey is a form of disorderly conduct in which the score is kept.

It’s not necessarily the amount of time you spend at practice that counts; it’s what you put into the practice.

The highest compliment that you can pay me is to say that I work hard every day, that I never dog it.

This is your moment. You’re meant to be here.

A fast body-contact game played by men with clubs in their hands and knives laced to their feet.

My other car is a Zamboni.

To me, a hockey player has to be every sport rolled into one ice skater, baseball player, football player, etc. It’s just incredible to watch!

A puck is a hard rubber disc that hockey players strike when they can’t hit one another.

How would you like a job where, every time you make a mistake, a big red light goes on and 18,000 people boo

To succeed in hockey, you need teamwork.

Why is a puck called a puck Because dirty little bastard was taken.

Hockey, honestly, was my first love. The excitement, the fast pace, the intensity of the game… I still love it to this day.

hockey is my strongest sport, and if I lose a game, I take a long, hot bath and moan about it.”

You watch a hockey game, and the hand-eye coordination and the speed is really miraculous; how those guys track the puck alone, just following it with their eyes.

Hockey is a tough, physical game, and it always should be.

I love hockey. Hockey is my go-to sport. It’s my jam.

I have always been interested in finding new ways to play and have looked at handball keepers and ice hockey goal-minders. It helps me.

If you’re a sports fan, it is really cool when you see the best-on-best for hockey at the Olympics.

Hockey is a unique sport in the sense that you need each and every guy helping each other and pulling in the same direction to be successful.

There are no environments where you’re only going to win, because life just isn’t like that.

Hockey’s filled with great people, and it’s a great sport, and I encourage a lot of people to play it because of the relationships that you make in hockey.

Hockey’s a funny game. You have to prove yourself every shift, every game. It’s not up to anybody else. You have to take pride in yourself.

Discipline is the bridge between your hockey goals and hockey success.

To succeed in hockey, you need teamwork.

The goal is too small and the goalies are too big.

You don’t have enough talent to win on talent alone.

You were born to be a player. You were meant to be here. This moment is yours.

You find that you have peace of mind and can enjoy yourself, get more sleep, and rest when you know that it was a one hundred percent effort that you gave – win or lose.

It’s more fun to be playing hockey than doing anything else.

You only reach the hockey goals you aim at. Therefore, you might as well aim at reaching your ultimate hockey goals.

Sometimes people ask, ‘Are hockey fights real’ I say, ‘If they weren’t, I’d get in more of them.

Nobody’s a natural. You work hard to get good and then work to get better. It’s hard to stay on top.

Hockey’s a funny game.You have to prove yourself every shift, every game. It’s not up to anybody else.You have to take pride in yourself.

I found out that if you are going to win games, you had better be ready to adapt.

Even when you’re being safe, eight hours of choreography makes you look like you’ve been through a war. It’s hard. It’s like playing hockey for eight hours.

Some of us love hockey not just for its ferocity and skill but for its underlying code of civility off the ice.

Hockey should have some appeal. It’s a good game in that is full of action, very quick, and it can be high-scoring.

Sometimes people ask, ‘Are hockey fights real’ I say, ‘If they weren’t, I’d get in more of them.

It’s an honor and a thrill and a privilege just to play in the NHL.

When you’re playing an exhibition, you’re kind of letting everyone get an opportunity.

I don’t think any, one person will ever be bigger than the game.

Everything I did in hockey, I worked for.

Hockey is a unique sport in the sense that you need each and every guy helping each other and pulling in the same direction to be successful.

Hockey’s a funny game.You have to prove yourself every shift, every game. It’s not up to anybody else. You have to take pride in yourself.

The greatest thing about playing obviously is winning, and you can’t replace that experience with anything.

I get a feeling about where a teammate is going to be. A lot of times, I can turn and pass without even looking.

Simple philosophy be on time, come to the rink ready to play. And we pretty much did that all the time and pretty much learned as we went.

Nobody’s a natural. You work hard to get good and then work to get better. It’s hard to stay on top.

To me, hockey was always tremendous fun. That’s what kept me going for so long. I simply love to play hockey.

Every day is a great day for hockey.

Only one thing is ever guaranteed, that is that you will definitely not achieve the goal if you don’t take the shot.

The greatest thing about playing obviously is winning, and you can’t replace that experience with anything.

We hope you had an amazing time reading these hockey quotes and sayings. Some of these quotes are already quite popular on the internet and some of them may seem new to you. Some quotes may make you laugh and some quotes may give you goosebumps, moreover, if these quotes give you a bit of inspiration, then that is our success.

If you loved these quotes about hockey or if a little bit of motivation grew inside you to do better in hockey and practice hockey more often, then you can share your favorite hockey quotes on social media and show your love and passion for hockey to your surrounding people.

If you are into American football, then you can check out our amazing Quotes about NFL

You can also share your favorite hockey quotes with your friends, family, or your loved ones.

Also please let us know if we have missed any of your favorite quotes about hockey.

It's better to have a gun and not need it than to need a gun and not have it.
If guns cause crime, then matches cause arson.
quoteserateam 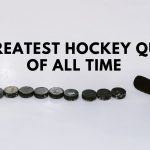